Values are described in possible ranges as estimations are inheriantly uncertain. Using sentivity analysis can yield how changes in variables affect the economic analysis.

Probability is used to consider varing data, and is based on theory, historical data, judgement, or a combination. Variables with a probability are uncertain (random / stochastic) as opposed to certain (deterministic).

Random variables are statistically independent - that is, the result of an outcome for one random variable, won’t affect the realization of another random variable. A project criteria (NPV or IRR) depends on various input variables. Thus we have to consider the joint probability distribution of different combinations of input parameters.

Recall the joint probability of two independent events is given as:

Suppose the oil company has the following outcome:

But also the oil company has the following outcome for oil prices:

Then there are \(2\times 3=6\) total combinations of outcomes. The probability for each one is as follows:

Recall from random variables notes that the general equation for expected value is the sum of weighted average based on the probability of occurance:

Suppose we have the following data:

We want to quanitfy and evalaute the risk. A common measure of risk is the standard deviation, or square root of variance:

However, we only use standard deviation because the units match with expected value. Expanding the formula out, we get:

Where \(x\) is the outcomes in the sample space, and \(f(x)\) is the probability density function (PDF). The larger the standard deviation, the larger the risk.

Then the expected EUAB is

Then plug the numbers into the formula and get standard deviation:

Risk vs. return graph is a visual way to consider the risk (standard deviation) and the return (expected value).

Note that the return is usually in the form on internal rate of return. 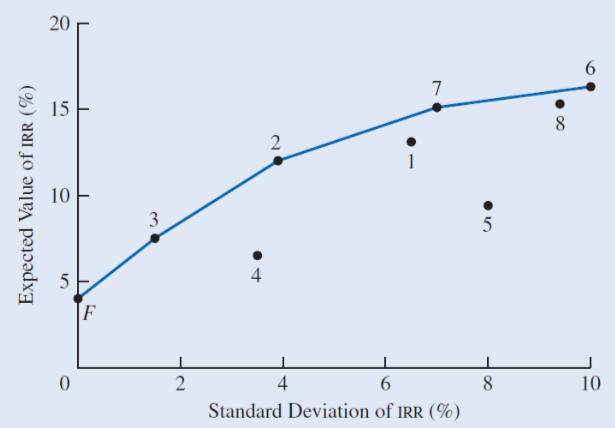 Notice that it’s less risky when SD is lower, but the return is less.

Also notice that the rate of return tapers off as SD increases meaning eventhough the return is larger, the risk is riskier.