Evaluate the difference of the net cashflow for each period. This will be used to to find present worth.

3. Solve for effective interest rate such that NPW of the incremental difference is 0

Recall that in IRR analysis, the IRR is when NPV is 0. Here we want to find the net present worth of cash flow from all periods and equate it to 0 to solve for \(\Delta\)IRR.

4. Choose the alternative based on \(\Delta\)IRR

One can plot the alternative’s NPV vs. interest rate graph together. It immediately becomes apparent. 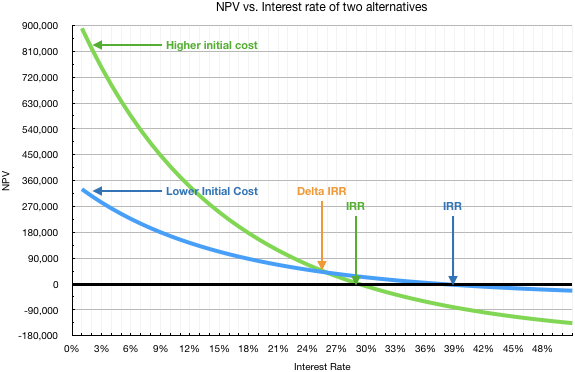 For multiple alternatives, we are still doing the same two-alternative incremental IRR analysis. Except it’s a “battle royale” such that only the best option remains. The process is: