In the circuit of Figure below, design the widths of the pull-down transistors so that VOL=0.1 V. (All transistors are minimum size, L = 0.1 μm. Explain the results.

Since the diagrams don’t show how the transistor bulk are connected/biased, we can assume that there is no body-bias; and VT = VT0 = 0.4 V.

We first take a look at the extreme ends of operation. When Vin is high, VOH is VDD because the MOS is in cut-off. Thus no current flows through the resistor and the voltage drop across the resistor is 0.

Since our parameter of interest is VOL and these are inverters, we are interested when the input voltage is HIGH.

The resistive load transistor operates in the linear region. So we equate the current in the resistor to the current through the NMOS (IDS):

Isolate and solving for W:

Note that the centimeter (cm) cancels out when we multiply μn and Cox. So we do the rest of the calculations with μm as the unit for length.

The width of the NMOS transistor for the resistive-load inverter is 0.4 μm.

Again, we start by equating the current of the top transistor with the bottom transistor: IDSL = I DSI.

Using the exact same equation as above, we use 1.6 - Vout instead for VGSL. But Vin (for the bottom NMOS) remains at VDD of 1.2 V.

The resistive-load inverter is able to have a output voltage all the way up to VDD which is good. But the resistor is cumbersome in digital design, and often means slower and bigger circuit. The size of the transistor thus is also relatively large at 0.4 μm.

Using the saturated-enhancement-load inverter, we no longer need the resistor. However, the maximum output voltage (high) is limited to VDD - VT. The trade-off is compensated with the small transistor size: at only 0.2 μm.

Lastly, we bias the gate voltage of the load NMOS exactly VT higher to obtain a maximum high output voltage of VDD. But the result is we use a substantially larger transistor: at 0.3 μm.

The design presented in the diagram is a buffer or voltage follower or something like the Redstone repeater from Minecraft.

Output swing: because the PMOS is the pull-down device, VOL is at least VTP, the threshold voltage from the PMOS. Similarly, because the NMOS is used as a pull-up device, VOH is at most VDD - VTN.

Notice that positive edge characteristics is different from negative edge, therefore we have hysteresis. It looks like this:

Theoretically, the gain should be close to 1 as output voltage follows input voltage. However, this is not a valid gate because it fails the following requirements:

In additional to lack of noise-rejection, this design also lack regenerative properties. 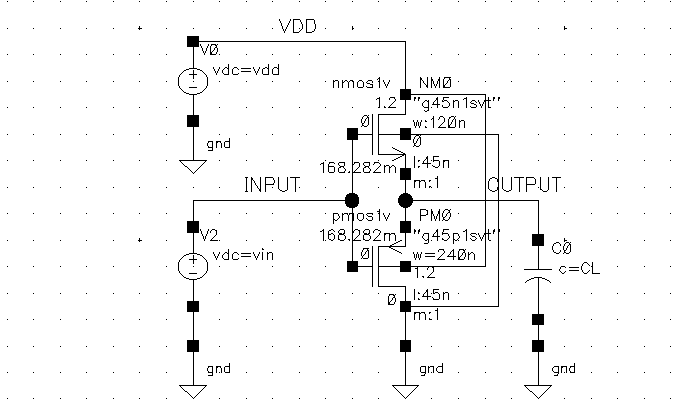 Running the DC sweep on Vin from 0V to 1.2V (VDD) gets us the follow VTC plot. I also took the derivative of the green curve (VTC curve) so we can see that there exists hysteresis more clearly. The plot is a bit different from what I expected. 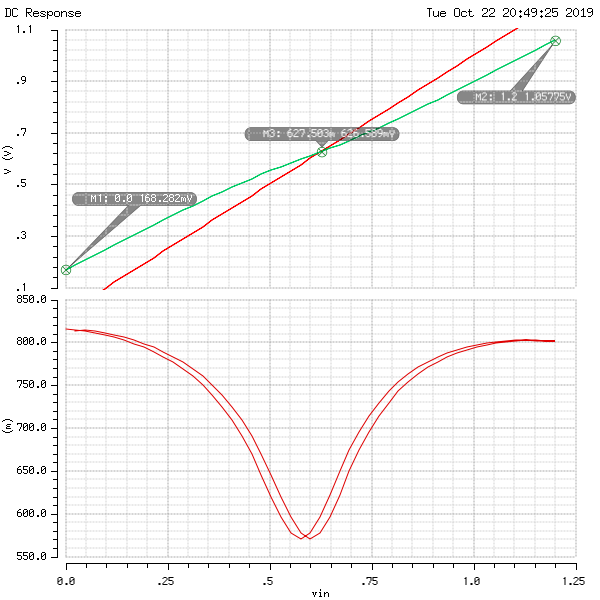 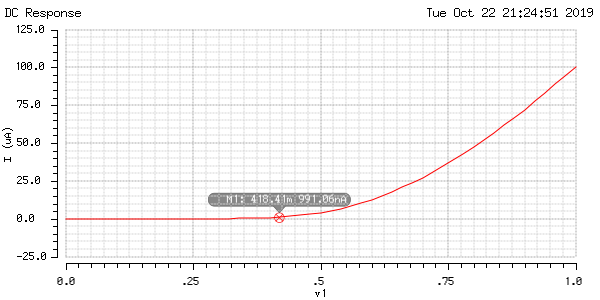 Using the data collected above, we can compute for the body-effect coefficient $\gamma$:

I used Excel to compute the other data where VSB=V2 is not zero and using the formula:

The body-efficient coefficient $\gamma$ varies with the voltage across source and bulk and it ranges between 0.12 and 0.41.

Consider the layout in the figure below implemented in a 180nm technology. Assume that the transistor has W=900nm, L=180m, and a source/drain dimension Y=800nm and a lateral diffusion of 22nm. Let tox = 40 Å.

Let’s first find the oxide capacitance, which is a function of the thickness of the oxide layer.

Then the gate capacitance is simply multiplication by the length L:

Since the thickness of the gate, Tpoly is not given, we assume that the fringe capacitance is negligible (Cf = 0).

The overlap capacitance for each overlap is given by the oxide capacitance multiplied by how much is overlapped (lateral diffusion LD=22 nm).

The total overlap capacitance for each overlap is

The capacitances broken down into the three parts: gate-source, gate-drain, and gate-bulk is as follows:

Next, the zero-bias junction capacitance, where εsi is the pure silicon permissibility at 11.7ε0:

Lastly, to get Cj, we multiply the per-area capacitance with the area: which is the bottom plate and the side walls.

To calculate the junction capacitance, the formula is

Where A is the area, VJ is the voltage across the junction, and m is ½.

When VD is 1.8V the voltage across the junction is the voltage of the bulk subtract the drain voltage:

Plugging in, we get

When VD is 0, the junction voltage is 0. So junction capacitance is simply

Calculate Vs of 2-input NOR gates when one input is switching and with both inputs tied together. The device sizes are WP = 24λ and WN = 6λ. Use Cadence to find results when switching only input A, AB together. Results for two inputs switched separately vary slightly. Explain the discrepancy between theory and simulation.

First, I modelled the NOR gate in CAD. Note that I left the width property of the PMOS and NMOS as variable WP and WN. Here, we are using λ = 100nm.

Only Switching Input A

Next, I created the test-bench for just switching input A:

I setup the DC sweep analysis for Vin from 0V to 1.2V (VDD). Here is the voltage transfer characteristics (VTC): 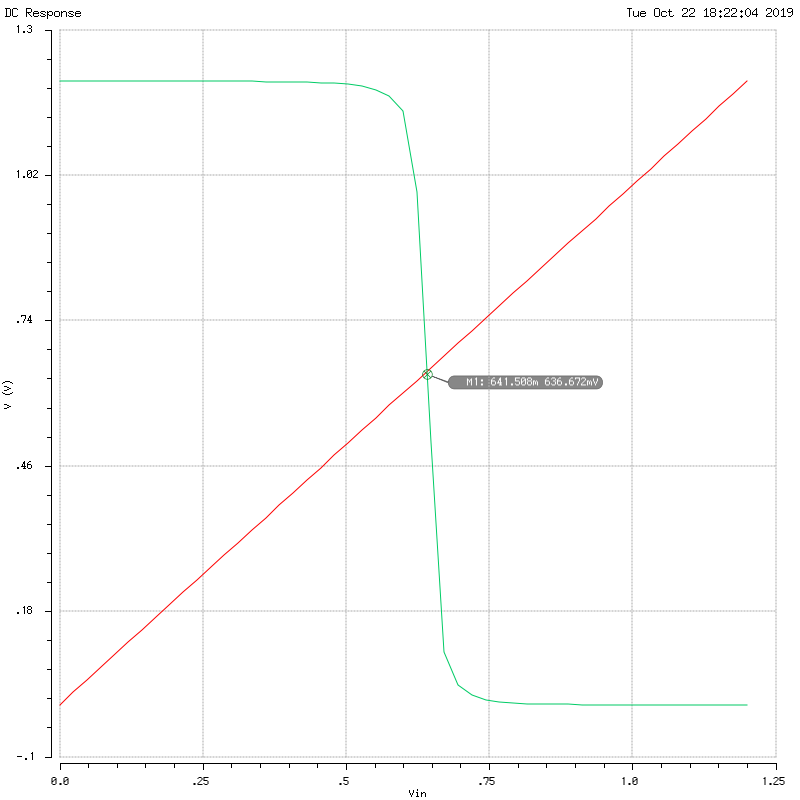 Tied Inputs A & B

Now I modify the test-bench such that the input A and B are tied up together:

And here is the corresponding VTC plot: 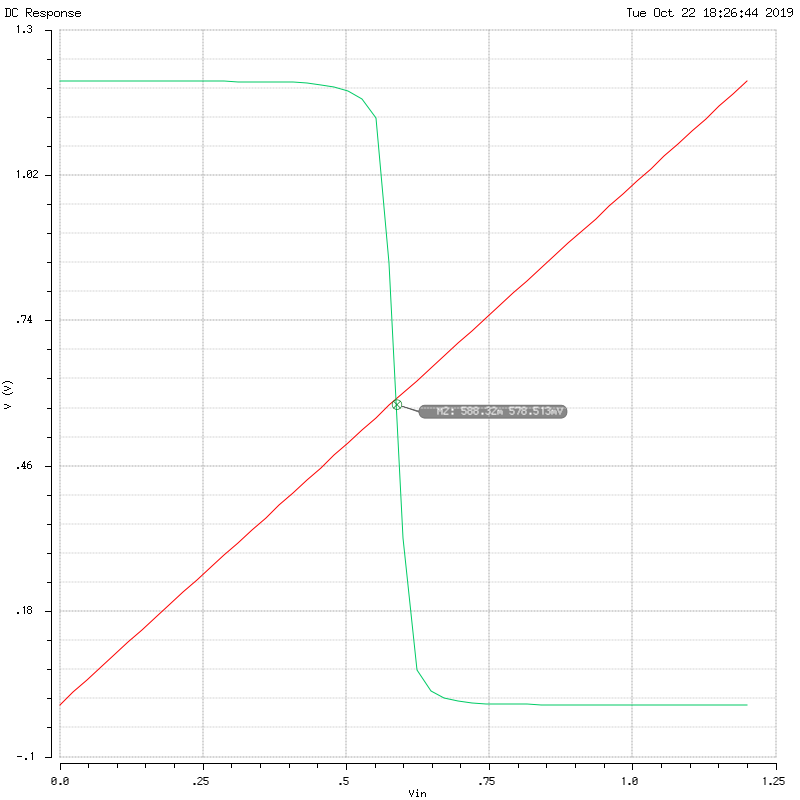 Now the switching voltage VS = 0.588V has shifted to the left.

“How much stronger the NMOS is to the PMOS” can be described by the factor $\chi$:

And the switching voltage is given by:

The two extreme cases are: if only one input is switching, and if all inputs are tied as one. Any behavior of the gate (in terms of the VTC) is bracketed between these two cases.

Case 1: only A is switching:

As per standard CMOS design, for a NOR gate, the PMOS would be 4 times larger than the NMOS. However, because the MOS connected to B never switches and is grounded — the B-PMOS is a short, and B-NMOS is an open circuit.

The resulting (simplified) circuit is a single-input inverter:

Note that in the diagram, I used “W” to show relative size of the NMOS and PMOS. To fit the problem description, W is equivalent to 6λ.

Compared to a standard inverter where the PMOS is suppose to have the double the width that of NMOS, we have 4 times the width. Meaning that the pull-up PMOS is much “stronger”. In other words, $\chi$ is smaller. Thus, we expect the VTC to shift to the right →.

Shorting all the inputs together and using the same simplification used for case 1, we get the following equivalent single-input inverter (adding resistances: 4W and 4W in series makes 2W; W and W in parallel makes 2W):

Now compared to the standard inverter, NMOS is now much stronger than PMOS (since it should’ve been half the size). So $\chi$ is larger, and we expect the VTC to shift to the left.

Note: for this problem, because the CAD library doesn’t allow sizes less than 120nm, we will use L=100nm for both NMOS, W=120nm for top NMOS, and W=1 μm for bottom NMOS.

Here is the schematic of the the saturated-enhanced inverter cell view:

Here is the VTC plot of this circuit, DC sweeping the signal INPUT from 0.0V to VDD (1.2V). The green curve is the OUTPUT signal. 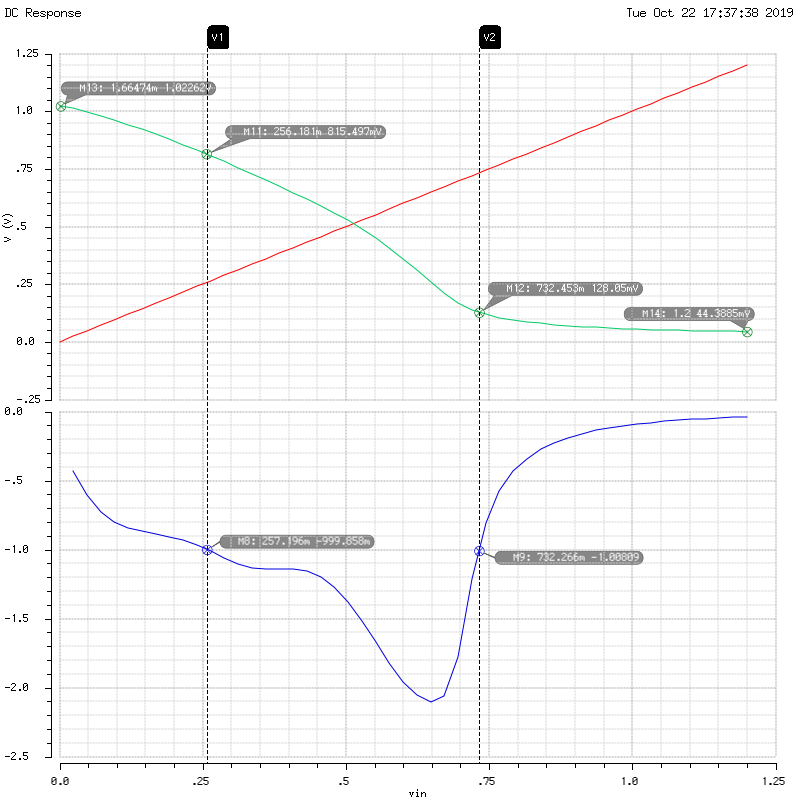 To find the noise margin, we must first find VIL, and VHH which corresponds to the positions on the green curve where the slope is -1. We can find the slope by taking the derivative of the graph (in blue).

Finally, we have all the values to compute the noise margin: