Lecture and slide by Mieszko Lis.

Suppose we have two cores, but six processes (A-F), how do we run all the processes seemingly concurrently.

Every time step (e.g. during a timer interrupt), we delegate the compute resource to a different process.

Recall: Every process has a parent, except PID 1 which is started by kernel during boot. Processes can also create children and need to wait for them to finish.

Q: How does processes pass requests to kernel? (hint: syscall)

Q: How does hardware notify kernel, e.g. how does the computer know when a key is pressed? (hint: interrupt)

To answer the above questions, we need to see what happens from the bottom of the stack.

A CPU will execute instructions one after the other sequentially until it dies 💀. If we want it to do something interesting we must have conditional/unconditional jumps/branches. We can also call and return from functions.

We have done all of this already.

Q: What happens when something unexpected happens? Something that is unexpected to the program could include:

We cannot use the standard control flow we know and love to handle these exceptions. We need to use :rainbow: hardware exceptions :rainbow:.

Note: “Exception” word in this case is not the same as C++/Java/Python exception.

Also note: “Exception” in this case sometimes also known as interrupts and traps.

There are two types of exceptions:

Note privilege level is different from priority: that privilege level dictates whether if a process is entitled to carry out certain operations (e.g. interacting with hardware), but priority influences time-sharing scheduling: i.e. how much time/resources a process gets. 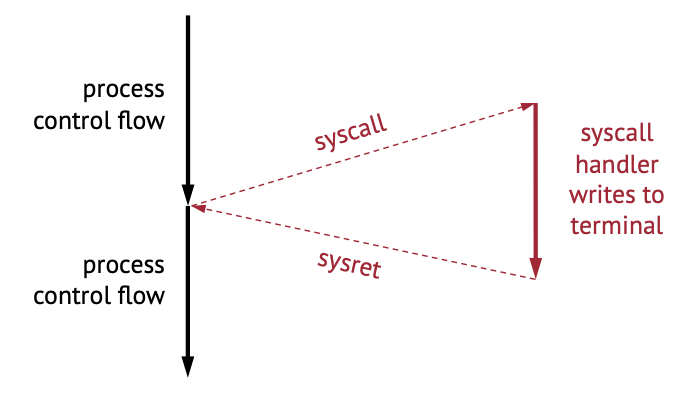 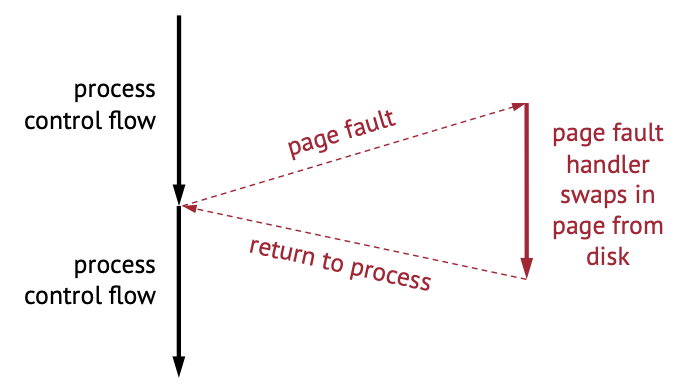 So far we understand that:

In x86-64, for example, a system call uses syscall and sysret instructions. A couple of things ahppen when we call syscall

There is a table somewhere in memory that is known to the processor called exception vector table that outlines “for this exception, there is this address for a handler.”

Upon exception entry, we switch to another stack (at some known address). We save the original stack pointer, rflags, and rip by pushing it to our current stack. We raise privilge level and then jump the handler code via exception table.

This is like a syscall but we jump to a different stack.

Upon return, everything is just undone (like a function call).

Sidenote: How Does a Debugger Breakpoint Work?

How does a breakpoint trap the execution to stop at where it needs to stop? (Hint: the word “trap”).

The fast way to do this is a hardware breakpoints – the hardware can support a few breakpoints that help stopping execution at a few designated instruction addresses. (e.g. registers DR0, DR1, …). When the PC (rip register) matches one of these breakpoint addresses, it can trigger an exception – who hands control back to the debugger.

Exception handler masks exceptions – so that other exception cannot occur.

Interrupts hardware so that we can ensure future exceptions are not lost. Once the original exception is handled,d we can re-enable the exception. Some part of handlers re-entrant (e.g. for clean up)

Some exceptions cannot be masked (NMIs). One example is illegal instructions – the processor literally cannot do anything else – so it can’t be masked.

In Java (and friends) exceptions:

We know that processes can be organized in a tree – because parents can launch children processes.

From the kernel perspective, there are two piece of implementation to carry such management:

If we want to spawn another process, we need to first fork, then we replace one of the copies with another program we want to run with execve (fork-and-exec).

Fork is a system call that returns a new process ID for the child process upon success:

Note: fork returns -1 if the fork fails and cannot create a child process.

The cloned child process is exact duplicate of the parent, but it has its own virtual memory space.

Where getpid() gets current process’s PID and getppid() gets parent PID. In practice, one should always check for errors when we’re forking (but for brevity is ignored in this example code).

Q: how many lines does it print?

Since when we called fork everything gets copied, including program flow, so printf is called twice – once in the parent, once in the child. Suppose here’s the output:

We can tell that the first line comes from the parent, since p – the return value from calling fork is a child PID and that the child’s parent PID is 1 on the second line.

Note: the order this occurs is not defined. We cannot assume that parent/child comes first. We must look at the PIDs to determine child/parent relationship.

We can use child processes for concurrent processing, e.g. use a seperate child process for each instance of web server connection.

When we spawn child process, both parent and child continue to run. This raises several issues:

If a child dies, we have to clean up. Consider the following code, if the code is in a child process, it will print “child”:

Once we run this, the child immediately finishes but upon inspecting list of processes we see that the child process still exists with status Z+:

waitpid is a system call we can utilize to reap child processes. Here is its API:

We use the system call execve to replace a copied process with a different one; here is its API:

The program arguments and the environment are arrays of strings to be provided to each process. While arguments can vary specifically from process to process, environment is expected to be persistent (same to all programs).

We can use child processes for concurrent processing, e.g. use a seperate child process for each instance of web server connection.

We started with the parent; then we called fork and got an exact copy of the parent process. Upon running execve (1) we replaced the child memory space with new data – including new binary for the program we spawned.

In the parent process, we can query the status of the child process (2), and when we the process dies, waitpid returns and the parents print the message.

So far our parent process is hanging on waitpid when it’s interested in child process’s signals. But what if we want the parent process to continue doing other work and be notified when child exists?

Kernel or process takes action depending on the signal. The signals KILL and STOP are always handled by the kernel, and other signals can be caught by having signal handlers in programs.

A list of UNIX signals can be found here: POSIX signals.

For a kill signal, we just need to call the kill command and specify the PID. The kill signal will then be handled by the kernel – kind of like an exception handler.