Sustainability as an idea has existed for a long time, but there is a growing focus on sustainable development since the 1950s due to rapid increase of population, wealth, and health for all countries.

Video on rapid growth of countries.

Because of better wealth, people are consuming more resources. Canadians have one of the highest per-capita consumption rates. The per capita material footprint is the the sum of extracted material (typically non renewable) required for each person.

The increase of both population and consumption per capita will lead to economic and ecological impacts. These impact could be positive (good) or negative (bad). The social or environmental impact can be roughly described by:

Some of the impacts we observe today are:

The working definition of sustainable development, according to United Nations1 is:

Developments involving systems thinking that meets the needs of the present while providing society, environment, and economy wellness without compromising the needs of future generations to meet their own needs.

Biocapacity is the productivity of land areas such as forests, croplands, fisheries, and land for absorbing human waste.

Ecological footprint (EF) measures the current human demand on earth’s ecosystems and natural resources. EF provides an estimate of the area of biologically productive land and sea to sustainably support human activities. The unit is [area/year]. The method of calculating EF is outlined here3.

Ecological deficit is when the total ecological footprint is greater than the total biocapacity of the area available to that population.

Natural capital is the natural resources on Earth’s biosphere that provide ecosystem goods and services imperative for survival and well-being 4. Like financial capital, the idea is that we use the what we have in a way to ensure abundance of capital is maintained or increased over time.

To reduce the worst-case impacts of the climate change, we need to reduce our GHG emissions significantly to limit. There is a need to limit the average global temperature increase to 1.5 degrees Celsius before 2030.

UN Intergovernmental Panel on Climate Change (IPCC) works together to develop a strategy. They publish a report with models and predictions every few years.

The Paris Agreement was adopted by 195 countries in December 2015 at International Agreement on Climate Change (COP 21). The key agreements are:

Green house gases (GHG) should be considered in any engineering project. GHGs are any gas in the atmosphere which traps heat in earth’s atmosphere.

To quantify the effects of GHGs, we use Global Warming Potential (GWP) index referenced to with $\ce{CO2}$.

Sometimes we express how impactful a GHG is by quantifying them in terms of \(\ce{CO2}\) equivalent by multiplying the mass of GHG by their GWP. 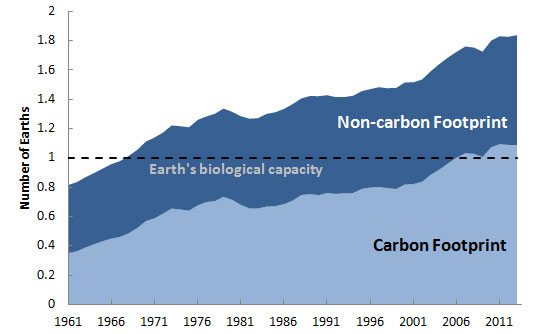 Biodiversity loss is considered as significant as climate change. They are important because humans cannot survive without healthy and resilient ecosystems.

Biological diversity (biodiversity) refers to the variety of specifies and ecosystems 6 as three components:

Biodiversity loss occurs even with absence of humans but happen at a low rate and do not result in gene pool or ecosystem loss. About 60% of the animal population have been lost since 1970 due to human activities. 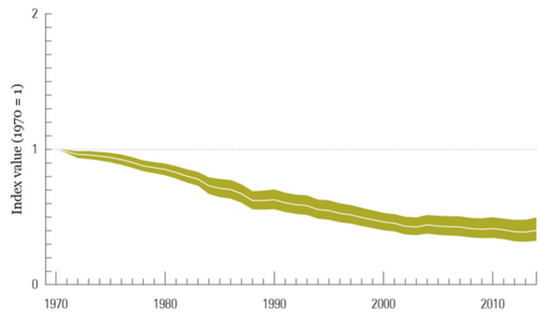 Biodiversity losses could lead to, but not limited to, some of the following 7:

A healthy ecosystem supports or provides benefits humans physically, mentally, and socioeconomically. The support is called ecosystems services. They are services of: