Comet Hale-Bopp has an orbital period of about 2450 years and an orbital eccentricity of of 0.995.

(a) What is the semi-major axis of Comet Hale-Bopp’s orbit?

We can apply Kepler’s third law: where the period of the planet’s orbit squared is directly proportional to the cube of the semi-major axis or the orbit.

Then we can isolate and find the semi-major axis:

(b) Use the orbital data of Comet Hale-Bopp to estimate the mass of the Sun.

We’re using the gravitational constant $G$ which has the units m3s-2kg-1. So we convert the previously calculated values and plug it into our equation.

(c) Calculate the distance of Comet Hale-Bopp from the Sun at perihelion and at aphelion.

We start with the definition of an ellipse centered around one of the foci in polar coordinates:

The perihelion and aphelion orbiting altitude of the comet around the sun is 0.909 au and 362.6 au respectively.

(d) Determine the orbital speed of the comet when at perihelion, at aphelion, and on the semi-minor axis of its orbit.

Using conservation of energy of an orbit’s kinetic and potential energy, we get the equation for speed in an elliptical orbit:

The equation then simplfies down to

(e) How many times larger is the kinetic energy of Comet Hale-Bopp at perihelion than at aphelion?

We need to find the ratio of kinetic energy:

Which is just the ratio of the orbiting speed squared.

The kinetic energy for the comet is 1.59×105 times greater at perihelion than at aphelion.

Verify that the general form of Kepler’s third law applies to the 4 Galilean moons of Jupiter (Io, Europa, Ganymede and Callisto).

(a) Using the data in Appendix C of the textbook, make graph of log10P vs. log10a. You may use graph paper or a plotting program.

Recall the general form of Kepler’s third law is given as:

Then the textbook Appendix C section gives us the data:

However, we need to also convert it into units that is appropriate to Kepler’s third law before we take the log10.

Then we plot the log’d values (last two columns): 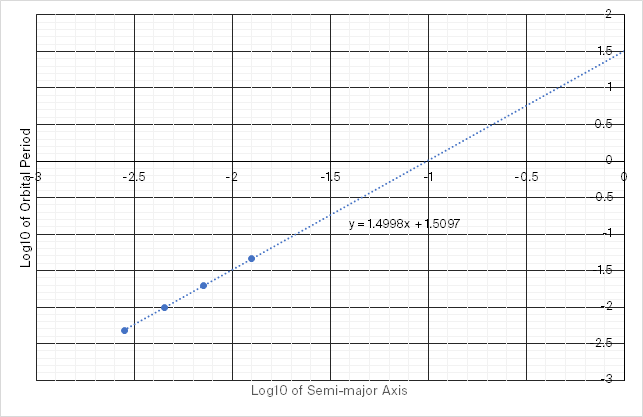 (b) Show that the slope of a straight line through the data is 3/2.

(c) Calculate the mass of Jupiter from the value of the y-intercept of your graph.

Now we can proceed with isolating $M_\text{jup}$ from the equation relating period to semi-major axis:

(a) Consider a satellite in a circular, low-Earth orbit, where the satellite’s elevation h about the Earth’s surface is $h\ll R_\oplus$. Show that the orbital period $P$ for such a satellite is approximately $R=C(1+3h/2R_\oplus)$. What is the numerical constant $C$ in minutes?

And assume that the circumference / total arc length of a full revolution is:

Period is given by:

Simplifying a bit, and I’m assigning the variable $\zeta$ to the constant part:

We can just approximate by truncating everything after the linear term ($\alpha x$). So:

Now plugging everything back:

(b) What is the orbital period for a low-lunar orbit, as was used by the Apollo command modules?

According to Wikipedia 1, the low lunar orbit is about 100km above the moon’s surface. And they have a orbital period of about 2 hours.