(a) Imagine that you are at the centre of the Earth, which you can assume to be transparent. Consider two points on the Earth’s surface that are separated by 10 arcseconds. What is the physical distance between the two points?

The physical distance we’re looking for between the two points is the arclength we’re trying to find, where the angle is 10 arcseconds. First, we convert the angle from arcsec to radians:

(b) How many square degrees are on the full celestial sphere?

The solid degrees that covers the full celestial sphere is 720 square degrees.

(c) You have a telescope with a CCD detector that has a square field of view of 4 square arcminutes. How many pointings of the telescope will be needed to cover an area of 6 degrees by 10 degrees?

Assume that we’re looking at the celestial sphere.

Then we convert 2 arcminutes to degrees:

It takes 180 and 300 pointings respectively to cover 6 degrees by 10 degrees area. Therefore, the total number of pointings required is

(a) The observed orbital synodic periods of Venus and Mars and 583.9 days and 779.9 days, respectively. Calculate their sidereal periods.

Mars is a superior planet. So we are solving for the “outer” sidereal period. Identical procedure:

(b) Which of the superior planets has the shortest synodic period, and why?

Using the relationship between sidereal and synodic period from above, and simplifying for superior planets, we get

To obtain the shortest synodic period, There must be a great difference in sidereal period of Earth and the superior planet. In other words, in this case, we’re look for a planet with the longest sidereal period, or the planet that orbits farthest away from center.

At the time of writing, the superior planet that has the shortest synodic period is Neptune.

First, the sketch of the geometry:

Now we assume a point on the ellipse such that the distance to one focus is the same as to the other focus ($r=r’$).

Then we can make a right-angle triangle and apply the Pythagoras theorem to find the semi-minor axis $b$. In particular, we know that $r=r’$ and that the definition of the ellipse is $r+r’=2a$ which leads to $r=r’=a$.

A simple model of a planetary atmosphere has the number density $n$ decreasing roughly exponentially with height $z$ above the planet’s surface: $n(z)=n_0e^{-z/H_p}$, where $n_0$ is the number density at the surface of the planet, and $H_p$ is is the pressure scale height. At the surface of the Earth, the number density for nitrogen is $n_0=2\times 10^{25} \text{m}^{-3}$ and the scale height for is about $H_p=8.7$ km. The model is valid up to about 90 km. Compute the number of nitrogen molecules in the Earth’s atmosphere. You will have to make at least one important approximation in order to do this; explain clearly what you have done. 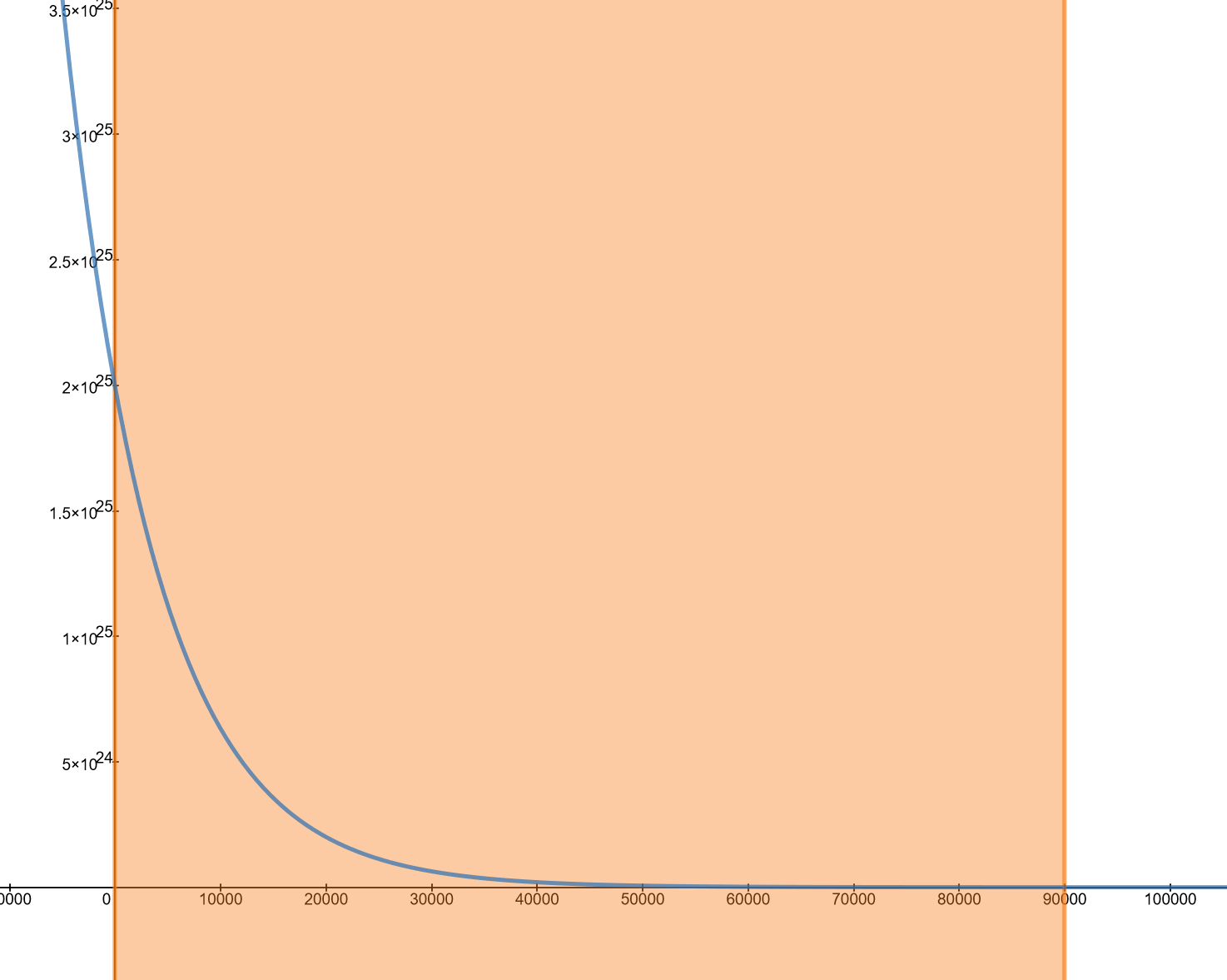 Notice that even though the exponential decay of number of particles is significant at the altitude of 90 km, there is still a significant number of nitrogen particles in magnitude of 6.43×1020 per meter cubed. We can make an approximation that the function $n(z)$ is piecewise such that for $z>90$ km, $n(z)=0$.

We approximate that the planet is a completely smooth sphere such that the density is uniform everywhere.

The function for total number of particles is an integration of a multiplication of density function and volume.

This is a very complicated function to integrate. So let’s do some digging into whether if this is necessary (See next section).

Knowing that because Earth’s radius is so large compared to the thickness of the atmosphere we’re considering, we can approximate Earth’s atmosphere as a flat sheet, by “unwrapping” the spherical shell into a flat disk with top area of $4\pi R_\oplus^2$ and 90km thick.

Now the modified function to integrate is as follows. The two equations are for lower and upper bound of number of nitrogen particles, respectively.

But because of the exponential falloff of the number of particles as we move away from Earth’s surface, the lower bound approximation is more accurate. Ergo we will just calculate the lower bound.

Let’s do the integration first.

Now we multiply the rest:

Using meter as standard unit for all calculations, we get the final answer of 8.875×1043 particles.