The celestial sphere is the observable sphere that surrounds our view point.

The idea was because stars and constellations seems to stay fixed with respect to the celestial sphere.

Retrograde motion is when a celestial body reverses direction with respect to the celestial sphere. 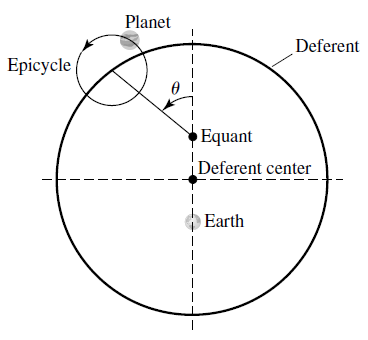 In attempt to explain and predict retrograde motion of planets, Hipparchus and Ptolemy refined a modle known as the Ptolemaic model. Ptolemaic theory is to predict planetary motion to the limits of observational accuracy of 10 arcminutes.

The Greek knew that this system could explain why planets produced retrograde motion. But the assumption was that all planetary orbits would be circular, such configuration could not predict planetary motion as well as Ptolemaic system.

It was also uncertain that stars were part of the solar system. Planets in the solar system are so far away that people could not find the difference in parallax compared to the background stars.

The Copernican model assumes that all planets have circular orbits, and that there are the following configurations with respect to Earth: 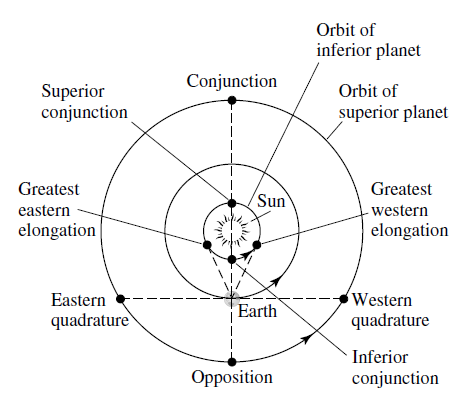 The sidereal period is the measured relative time interval of a planet’s orbit relative to background stars. i.e. the orbital period of the planet.

The synodic period is the time interval between repeating a configuration (e.g. from one conjunction to next conjunction, with respect to the sun). The general version of the formula is:

We can rearrange the formula to:

Furthermore, suppose the orbital period $P$ has the unit of years, and set one of the $P$ to Earth’s orbtital period, then we get: