Kepler’s three laws are descriptions based on physical observations and can be used to predict.

Planets travel on elliptical orbits around the sun, where the sun is located at one focus of the ellipse. 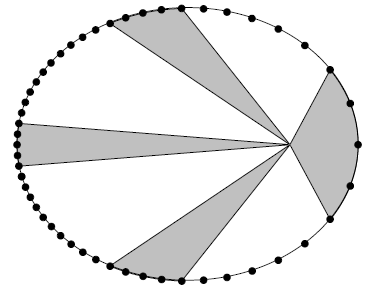 A line connecting a planet to the sun sweeps out equal area in equal time interval, regardless of planet’s position. Thus the second law also implies that planet’s orbital speed depends on its location.

The harmonic law is given by: \(P^2=a^3\) Where $P$ is the orbit period of the planet in years, and $a$ is the average distance / average orbital altitude of the planet from the sun measured in astronomical unit (AU).

Properties of an Eclipse 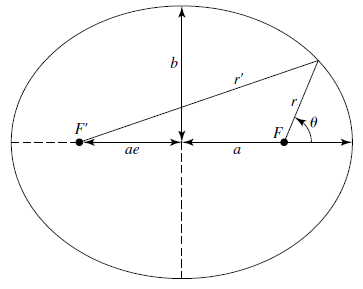 The elliptical motion of planets follow Newton’s law of motion and gravity.

This describes the following ellipse: 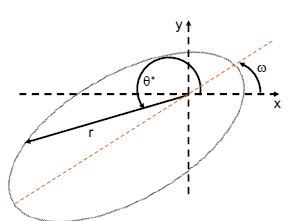 The ellipse may be slanted from our point of reference (x-y grid). The slant is described by longitutde of perihelion or $\omega$. The angle $\theta^\star$ is still in reference to the x-axis. The modified polar equation becomes: \(r=\frac{a(1-e^2)}{1+e\cos(\theta^\star-\omega)}\)

The velocity and radius are inversely proportional due to conservation of angular momentum.

Start at $\vec r$ and go a short timestep $\Delta t$ into the future. Then as $\Delta t\rarr 0$ ,the area of the blue triangle approaches 0. The blue triangle area is given by the vertical and horizontal position differences: $v_t\Delta t\times v_r \Delta t \over 2$.

Therefore $v$ is proportional to the inverse of the orbit altitude ($\frac{1}{r}$). AKA the planet speeds up at perihelion.

Finding an expression for $\theta$?

Kepler figured it out (Kepler’s method):