Using osxphotos library for Python, we can quickly access all photos in an Apple Photos library.

Turns out each photo in the Apple Photos library has been assigned a set of scores:

Some of these scores are ranged between 0-1 such as curation, overall, promotion, etc. These scores are used to determine if a photo should be featured more in the App UI.

However, we can also make use of scores like failure, intrusive_object_presence and noise which ranges from -1-0. While it seems like nothing is in the Apple’s Photos app that does anything with these scores, we can use these scores to pick out potential photos for cleanup/deletion.

Additionally, there are scores like: pleasant_camera_tilt, pleasant_composition, pleasant_perspective, pleasant_post_processing which ranges from both ends like -1 to 1. For these scores, we can also just pick out the minimum.

Note that all of these scores are calculated automatically using Apple’s blackbox ML, so it might have lots of biases.

Goal: (1) write a script that looks through all of the photos in my library, determine if a photo should be deleted ((2) using a criteria function), and adds them to Apple Photos album for

First we need to install osxphotos:

Once we have it installed, we actually need to modify a single line in the library. Go to where the python library is installed, and modify the .../osxphotos/__init__.py file:

Sweeping Through All Photos

Once we have the osxphotos library, it’s pretty straight forward:

The ps here is a list of osxphotos.PhotoInfo object. We can reference the score field. This gives us a osxphotos.ScoreInfo object, and we can then reference any of the score (using the list of scores above).

For example, this line takes ps and sorts it based on the failure score from lowest to highest

As part of the goal (task 2) we need to create a function that outputs a list of photos where we think we can delete.

Based on preliminary inspection of scores of all photos/videos in my personal photo library, I can think of a few observations:

Let’s put all this togther into a function/filter:

As previously mentioned, because of the modification we made to the library we can now use osxphotos.PhotoAlbum class to interface with Apple Photos app and create an album – powered by AppleScripts.

From here on now, we just need to add the list of osxphotos.PhotoInfo objects to the album:

It will take a few seconds or minutes but AppleScript will do the rest.

When we return to Apple Photos, we have a new album with all the photos that fit our failure criteria we wrote earlier. 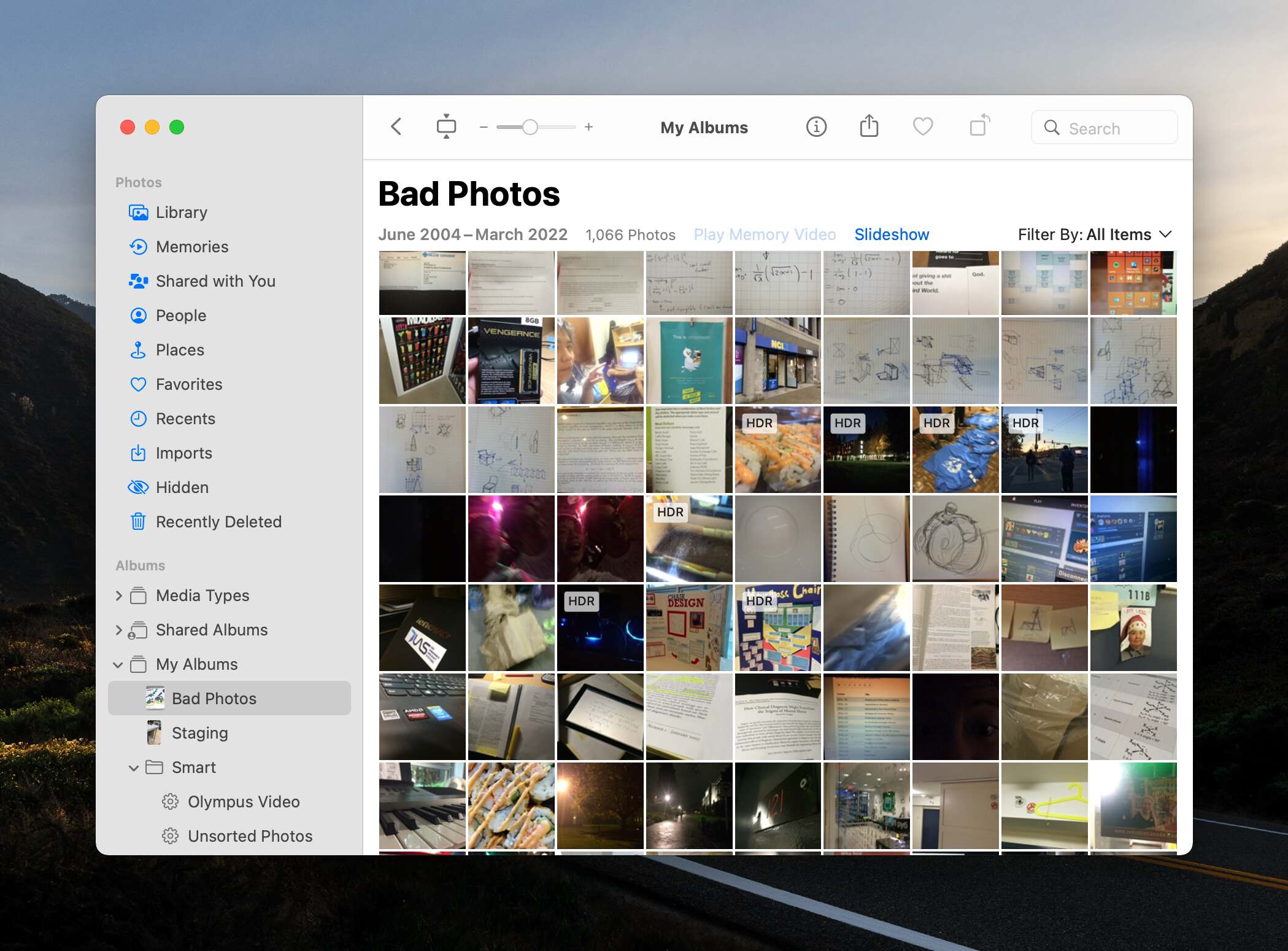 Of course this now the time to manually sift through each one of them and mark them for deletion.

Of course, since this whole idea hinges off of the scores produced by Apple Photos – which is ML, it’s far from perfect. There’s likely a lot of photos that are bad and that are not caught. Perhaps one can fine-tune the criteria function, perhaps one cannot as the scoring MLs are just not good enough. Perhaps a few number is far too simplistic to define whether a photo is good enough.

But at least this operation saves time and pretty much does the same thing what an $26/year app does. Cough cough Gemini 2.